Our trip to Wisconsin was educational as well as fun! We saw a lot of things and were able to do many things. The main thing my granddaughter loved to do was swim around in the swimming pool at our hotel.

We didn’t go to one of those big fancy water parks that the Wisconsin Dells is known for. We just stayed at a Holiday Inn Express, but my granddaughter didn’t care! She just wanted to be in the swimming pool as much as possible. I am starting to think she might be part fish!

Anyway, back to our hour long ride in the car and some sites we saw on our way to the festival!

I do not like sitting in traffic! If I have to go somewhere, I want to go there quickly. When it feels like I could get out and walk and reach my destination quicker than driving to it, I get claustrophobic in the car. 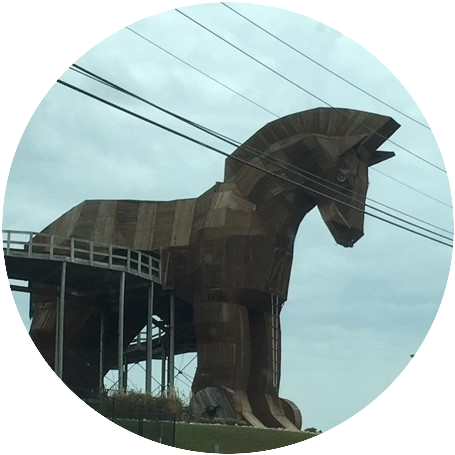 But this time it wasn’t as bad because there was plenty of things to look at. (I still didn’t like sitting in traffic, but we had plenty to talk about!)

One of the first things we saw was the Hotel Rome that was part of the Mt. Olympus Park. It was part water park and part amusement park with all kinds of rides.

The Hotel Rome was a place on site that people could stay at. It looked like the Colosseum in Rome.

The Mt. Olympus Trojan Horse was a part of a Go Kart track that spanned a large part of the park. It was very tall. The ride used to consist of a multi-level, three story track that went right through the belly of the horse. (That part of the track is now closed off) This track rages down 35 feet (10.7 m) around tight turns and back to the top again, according to an article I found on Wikipedia.

After we had passed the Mt. Olympus Water Park we continued on seeing different attractions being advertised on our right and our left.

The next one we saw that really caught our attention was a building that looked like it had been involved in a disaster. I said I thought it was the White House, because it looked like a President of the United State logo on the limo parked outside and it appeared to be a secret service man guarding one of the entrances, but we didn’t stop to check it out. We just thought it looked really cool to see this building that looked like it had gone through some sort of natural (or maybe, unnatural) disaster! 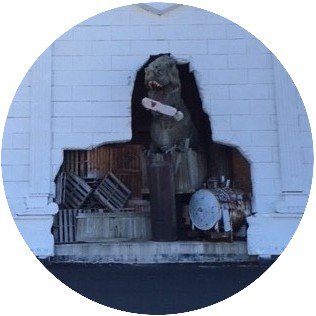 On the way back to another attraction after the festival, we saw what had caused part of the problem! This “little” guy was looking for a “friend!”

I’m not sure what this T-Rex was actually doing, but it appeared he was done with his “tour” of the building and was making his own exit! 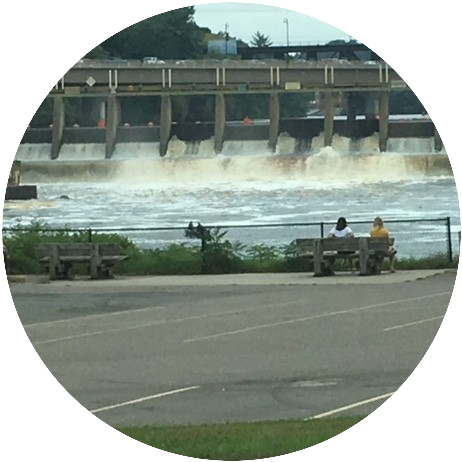 When we were nearing a turn that would get us a little closer to our destination, we saw a “waterfall.” It was created by a dam. It was a good experience to explain to my granddaughter what a dam was used for. This dam was on the Wisconsin River which we will actually begin our journey on in another post! (I know I said it would be in this post, but there was just so many things to see and talk about that I thought the boat tour down the Wisconsin River to see the Upper Dells deserved at least one post all to itself!)

I’m not sure what I was thinking!

At the actual festival, I did not take a single photo. As a person who has done journalism and photography for the past 27

years, I really can’t tell you what I was thinking. Obviously, I was not thinking about taking photos! Perhaps it was because I was tired from the long walk around the festival. Perhaps it was because of the huge crowd that felt like it was pressing in on us from all sides! Whatever it was, I don’t have any photographic evidence of it, except for this one I took of the downtown area and an interesting man, his motorcycle and the casket he was pulling behind his motorcycle!

Be sure to check out Part Three of our Wisconsin Dells trip in an upcoming post!