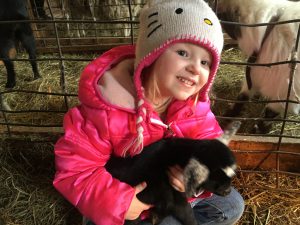 When the opportunity to have one of my grandchildren live with me on a permanent basis came up, a few things came to my mind.

1. Was I ready for raising another child?

3. Did I have what it would take to raise a child in this ever-changing world?

4. Did I have the necessary resources—financially and socially—to take this on?

I decided, along with my spouse, that we were, indeed, ready for these challenges and we were about to take the proverbial “bull by the horns.”

In all honesty, we could not have said “no” to our precious granddaughter. We just knew we would give it all we had to make her have an absolutely amazing life. We were willing to make whatever sacrifices would be necessary to make this happen for her.

Why are more and more grandparents raising their grandkids?

According to an article by AARP, there are around 5 million grandchildren being raised by their grandparents. That number varies a bit depending on where you are reading, but regardless of the number nationally, you can probably point out a handful or more grandparents raising grandkids right where you live.

As the national average rises for grandparents raising their grandkids, I decided to ask a couple of my friends who work in the mental health and foster care fields what their thoughts were on this subject.

I asked a friend who works as a social worker at the county level what they thought was happening.

She replied that because it is very expensive to place children in foster care, they often do a “family search” to see if there is a family member who can take in the children rather than sending them to the foster care setting.

That made a lot of sense, especially for the area we live in because it is one of the poorer counties in the state of Minnesota. Also, because of my work as a journalist for one of our local newspapers, I covered the county commissioner meetings and knew that they had recently approved hiring someone to do family searches.

From the personal experience of a friend whose children were placed with her parents, I know this is not always a “happy” solution. My friend’s parents did not want to be “saddled” with the responsibility of raising their grandkids. They enjoyed the freedom of being able to go wherever they wanted whenever they wanted without having to worry about getting a babysitter.

One friend who does home visits of youth in the mental health arena noted that what he sees is that if the grandparents had done their job right in the first place with their own kids, they might not be in the situation of raising their grandchildren in the second place.

While I understood his answer, I took exception with it simply because it is not always true. My spouse and I did well with raising our children. However, our youngest daughter had a brain injury which caused problems and made it difficult for her to make sound decisions. At the time that we received custody of our granddaughter, our daughter was also heavily into drugs which she began as a result of her brain injury.

Perhaps many grandparents are raising their grandchildren because of poor parenting in the first place, but that is really a “relative” comment because every situation is different. We’ll talk more about this in a later post.

So, you are a grandparent who now has the awesome task of raising your grandchild(en) for whatever reason. Now what?

My spouse and I like to look at this opportunity as a second chance—a second “story” so to speak, for us to be able to make a difference in the life of a child.

It isn’t easy, there is no doubt about that. You do have to change your life. You might have to give up “date night” for a while. You might have to spend more time at home. You might have to “bust a move” now and then! (Our granddaughter loves to dance!) Your life will change, but this is your “second story” and you can make a lot of choices as to how that story will go. 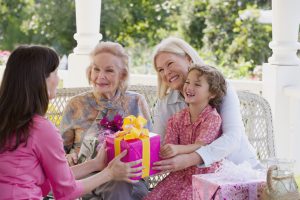 It had been a while since we’d had children in our home as parents. Several years, in fact. We had other grandchildren who came to visit, but not who stayed for more than over a weekend or a few days.

We had to relearn how to take care of a baby. Things change over the course of time, methods, procedures and the like, but the basics do stay the same thankfully. All babies need to have their diapers changed, they need to eat and they need to cuddle and be loved!

Since I met my spouse when her (our) children were a little older and were out of diapers, I didn’t have that experience of changing a “poopy” one! It wasn’t something I looked forward to, but when our granddaughter moved in with us on a permanent basis, it is something I learned to do for her. I learned how to feed her and lay her down for a nap and for bedtime at night. I learned how to tell if she just wanted to be held or if she was hungry.

Our other daughter gave us a lot of tips and pointers and helped us with her niece as much as she could. It was helpful because thing shad changed since my spouse had babies. Because she had three youngsters of her own, she had a lot of insight which helped us navigate the murky water of getting back into the habits necessary for raising a baby.

It is amazing, though, how quickly you find yourself doing what has to be done. You go to the store in the middle of the night because baby has a cough and you need to get something to soothe them. You take a day off work because baby is sick. In fact, my spouse quit her job so she could stay home with our granddaughter for a while. I also quit one of my three jobs, so that I would have more time to spend with the family.

Grand parenting—not for the weak of heart 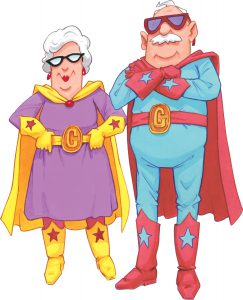 But now we were in a precarious situation—that of being grandparents and parents to our granddaughter.

Don’t get me wrong, we love all of our grandchildren, and we love spoiling them. But we also liked having our time alone and it was nice to see them go home with their parents after a fulfilling visit with us!

Now, we were placed in the role of not only being able to spoil our granddaughter, but also having to deal with her tantrums. We had to be the disciplinarians as well as the spoilers! It is definitely not for the weak of heart! We’ll get into this more in a later post, as well.

Our granddaughter is five now and we’ve been raising her since she was around six months old. With each new day comes a new thing we have to learn, a new person we are helping to mold and a life we are hoping to make a big difference in!

Is it worth it? For us, it has been 100% worth it. There are times we struggle, but we have found many useful resources and we are more than willing to share what we’ve learned with you…

To your journey and the continuation of ours…